The 2014 29th Annual Reading Toy Run proved to be more memorable than ever this year. Thank you so much to everyone that took part in what became a world record setting occasion. 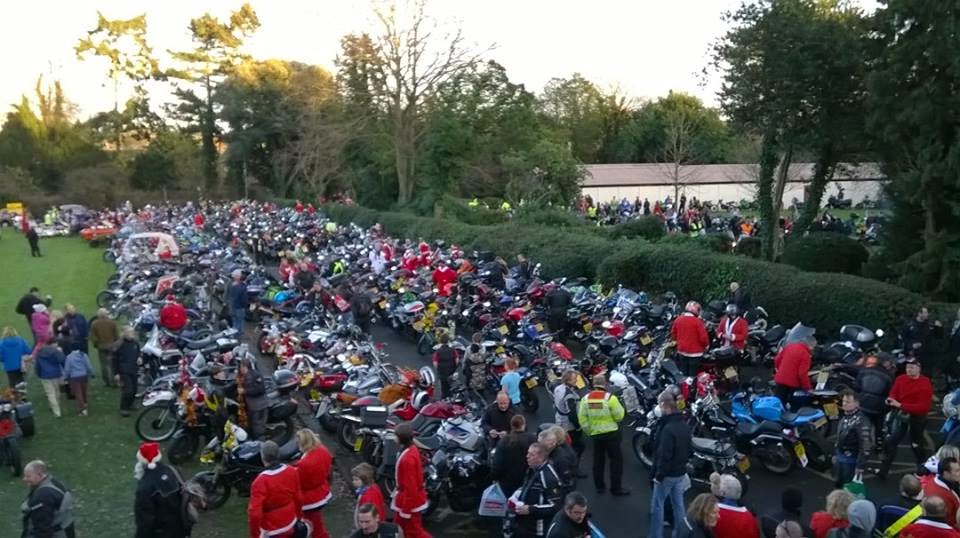 World records aside, Barnardo's High Close school have the privilege of distributing several thousand toys and gifts across a vast network of their own Barnardo's projects and also dozens of other local children's services. Your participation and generosity is greatly appreciated - as was everyone's patience as the queing took a lot longer this year.

That World Record....What's the story?
As the 2013 Toy Run entered Wokingham, a gentleman commented, "wouldn't it be great if this run could be entered into the Guinness World Records". That man was Sandy, who had for many years been the principal at High Close School. He was the one who many years previous, had opened the school to a bunch of bikers to bring their gifts and enthusiastically saw the occasion grow and set up the distribution of gifts around an increasing number of projects. Sandy retired from High Close some years ago, but continued to support the event but sadly he passed away in recent months. This year's world record setting attempt was to honour his memory and show our appreciation to Sandy's family. Quite simply the Reading Toy Run would not be what it is without Sandy's openness and welcome all those years ago that led to an ongoing partnership with High Close School.

We know there will be bigger Toy Runs going on in the world, in fact in the past our own event has seen bigger numbers on occasions. But no official record had ever been set and we were able to set up a meticulous process, which did mean it did take a long time to log everything, and we are pleased to be able to report that the first recorded Toy Run entry is 1735 participants!
That's 1735 who took part in the whole ride who presented a toy. This doesn't include the further 592 who were accompanying others, or brought other gifts such as football shirts, vouchers, iPods or other gadgets - all of which are needed, but for the purposes of the record it was specifically toys that counted.

Reading Toy Run thrives on a network of sincere relationships, as an organising group, with Barnardo's and among the thousands of those who turn up on the day. It also is about a generosity of spirit and gifts. If we lose either of those it ceases to be what it set out to be. 2015 will be the 30th anniversary of the event - don't necessarily expect to see another world record attempt, the amount of logistics involved is huge, but do come with the same commitment to the cause and generosity of spirit that will benefit many many children.

The connecting and sometimes reconnecting of our own relationships and the mystery of God connecting in all the frailty and vulnerability of the human experience  in the form of a baby can be the centre of our own celebrations. As we share time and gifts with one another, may we also find those moments of definition and maybe surprise, as we peel through the layers of wrappings, to expose the ever present gift of God's grace and mercy amid the busyness of this Christmas season.

God bless you and your loved ones this Christmas and on behalf of all the organisers and those who will benefit from your generosity, our sincerest thanks and deep appreciation of your support of this event.

Thanks also to the local media, Foster Wheeler, sponsors, residents and well wishers along the route and all the other unsung heroes that provide pa, refreshments, logistics, insurance, publicity and a safe event.