The date for the 2022 Reading Christian Bikers Annual Toy Run

Please bring along a new toy suitable for a child of any age, preferably un-wrapped and it will be distributed by Barnardo's.

Check the other tabs for further information, including advice on gifts and the road rules.

Thank you for your ongoing interest and support!

You may wish to join the Reading Toy Run Facebook Group, where additional updates are made in the lead up to the the event HERE 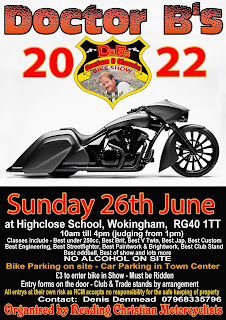 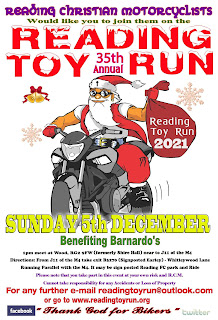 For gift ideas see the following: 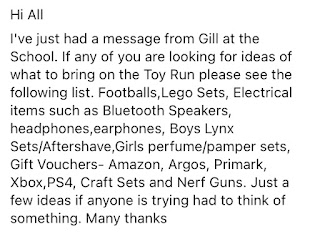 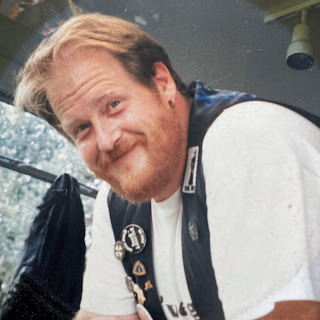 It is with deep sadness that we bring the news that our beloved friend, and the foundational heartbeat of the Reading Toy Run, Ben Spiller, has died.

After a short period of illness, Ben died peacefully on 9 April at the Sue Ryder Duchess of Kent Hospice in Reading. Whilst there, he had been constantly surrounded by his family, where he faced his failing health with dignity and a genuine sense of peace that his Christian faith brought.

For those of us close to Ben, we are truly heartbroken. As a husband to Jane for over forty years, a dad to three amazing kids and a grandfather to their children, our prayers are very much for them in these days of heartache.

It was Ben’s wish that in the present circumstances, his funeral be a small family gathering and we will honour that privately in the coming days. It was also his wish, that when we have the freedom to gather together once again, we meet to celebrate his life and mourn together as a wider community of people on the road and in church at a memorial service . We will also honour that, and plan to make that happen with details available in due course.

Ben lived his life in a way that leaves a huge legacy that came from his huge heart. An ordinary bloke that dared to believe you can make a difference in the lives of others – for good. The Toy Run is only part of the story. Many of us will bear witness to his friendship, to his infectious enthusiasm to be a ‘do-er’, not just a talker. He had an ability to co-opt a mixed bag of people to get a job done and many of us share deep friendships together because Ben was the original connecting point.

He didn’t see himself as a leader, but he was. He had an ability to gather people around him that grew to share the same vision, and get them involved to do the things he couldn’t do alone. It wasn’t about Ben, it was always about making a practical difference on the ground.

He remained driven by his no nonsense proactive faith in Christ, which had become the hub of his turning world. He didn’t over complicate it and he was more aware than anyone of his own rough edges. But the transformation he’d experienced in his own life was for real and he wanted others to know and experience that too. Often at the end of the Toy Run, or a press interview Ben would emotionally say, ‘Thank God for Bikers’. The biking community, for him, was his tribe. That community respected Ben just for him being uniquely him and responded to his call to get involved.

We are sad, and we are heartbroken at the loss of a friend and brother. We pray for Jane and their family in these days and we also pause, and say thanks to God for Ben – for all the aspects of his character that have coloured and enriched our lives. For that, we shall always be grateful.

May he rest in peace and rise in glory.

“For I am convinced that neither death nor life, neither angels nor demons, neither the present nor the future, nor any powers, neither height nor depth, nor anything else in all creation, will be able to separate us from the love of God that is in Christ Jesus our Lord.”

Thank You For Supporting the 2020 Reading Toy Run

Thank you from all those involved with this year's fundraising effort supporting Barnardo's High Close School and other agencies supporting children and young people.
You can still donate via this Just Giving page.

Here are the latest updates on where you can drop Toys off for this years effort in supporting the event.
PLEASE READ THE POST BELOW THIS ONE FOR FURTHER ADDITIONAL DETAILS 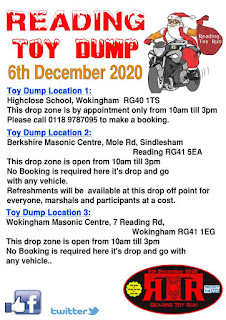 If you are unable to participate, then please consider donating via Just Giving - maybe the cost of the fuel you would have spent had the Toy Run been happening and anything you would have spent on a gift.
This will all help to make a difference to children this Christmas.
Please use this link HERE

SEE POST BELOW FOR FURTHER INFORMATION
If you use the Toy Drops, please adhere to Covid safe measures with regard to distancing, hand hygiene and the wearing of face coverings.
All of the gifts donated will be going through a sanitising process before distribution

You can support this years Toy Run via Just Giving also.
Please use this link HERE 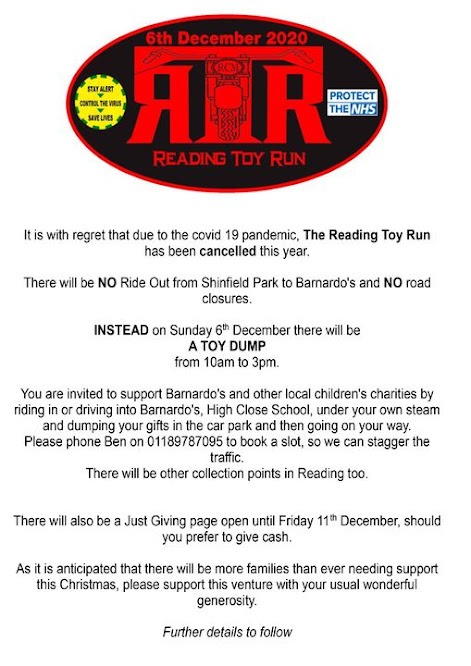 19.11.20 UPDATE:
Update with regards to Drop off Points. A lot of Toy Runners have been asking about Satellite drop off points so they can deliver Toys. Tony Barnes from Street Furnishings in Twyford , Pauline Jordan from Pinewood Cafe in Crowthorne and Alan Miles who will be at Reading Harley Davidson on the 5th December have all offered their services to help us out, so you can drop them there. We are also hoping to have 2 more drop off points on the 6th December as well as the school. These other 2 drop off points unlike the school you will be able to just turn up in whatever vehicle you want without having to book a slot and just drop and go. Please be patient with us because situations are changing daily and as you can imagine none of us have ever had to deal with anything like this before. Many Thanks for your generosity and patience.